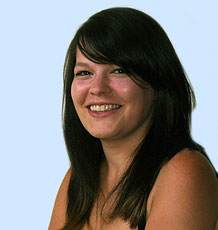 I graduated from the University of St. Andrews in 2008 with an honors degree in psychology. In 2011, I was awarded a 1+3 studentship from the ESRC on the interdisciplinary Health and Wellbeing pathway. I gained my Master’s degree in 2012 and I am currently working towards a doctoral degree. I am proud to be a part of the South West Doctoral Training Centre (SW DTC) registered across the Universities of Exeter, Bath and Bristol. I am a member of the Social, Environmental and Organisational research group (SEORG) within the school of Psychology and also the Psychology Applied to Health research group (PAtH) group within the Medical School. I am interested in rehabilitation following stroke and along with another PhD student, I coordinate the Action After Stroke group on St. Luke’s campus.

Project Description: My research is on the role of social influence in action observation therapy for recovery following stroke. Action observation has been shown to be an effective tool for promoting movement post stroke. Observing others perform actions activates mirror neurons in the brain as if the observer was performing the actions themselves. Furthermore, these mirror neurons fire at a more rapid rate when the observer is similar to the observer. This is in agreement with literature from social psychology which tells us that our beliefs and behaviours are influence by those around us, especially when we perceive others to be similar to ourselves (in-group members).  Taken together this suggests that action observation therapy delivered by an in-group member, with whom the observer can identify with, may influence the outcomes of the therapy through improving motivation to perform the behaviour and enhancing self-efficacy in the observer.