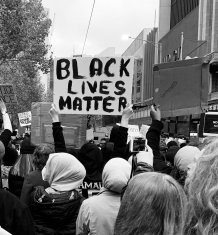 Psychologists carried out four studies to investigate the effects of distinctive treatment (seeking the insights of individuals) among racial and ethnic minority group members.

The results show that minority individuals approached in this way feel more valued by their minority group and are more willing to engage in collective action.

The research team, led by the University of Exeter, included the universities of Leiden, Columbia, Groningen and Sheffield.

"Protests tied to the Black Lives Matter movement are highlighting myriad forms of unjust treatment that racial and ethnic minorities face, and prompting countries to reckon with these injustices," said Dr Christopher Begeny, from the University of Exeter.

"When we think about what motivates members of a minority group to engage in collective action, putting aside the role that allies must also play, we tend to focus on minority individuals’ experiences witnessing or being a target of unjust treatment.

"This is of course a vital driver of collective action, and our research bears this out. But our findings point to another key driver – the positive treatment that minority individuals experience among fellow group members.

"Our findings suggest the quality of treatment within groups can be a powerful and motivating force. This positive in-group treatment serves as a vital resource to inspire and sustain momentum toward promoting racial justice."

The studies show that even a single expression of distinctive treatment can have positive effects.

“It can be expressed in person or online, among friends, neighbours, acquaintances, or even between minority members who’ve had no previous contact.

"This includes, for instance, taking an opportunity to seek out an individual’s ideas during conversation, or reaching out to a fellow member to hear about their experiences or insights on some group-relevant issue.

"It can also be as simple as reacting to a fellow member’s perspectives shared online with ‘likes’ or retweets.

"In each instance, an individual is shown that other racial and ethnic community members appreciate the qualities and contributions that that individual brings to the group.”

Dr Begeny said movements like Black Lives Matter may ultimately sustain long-term momentum for collective action in part though positive in-group relations, especially in moments when media coverage and public attention are focused on other issues.

Collective action can mean a range of activities including protests, making donations, willingness to "call out" everyday instances of bias or discrimination, as well as highlighting the positive societal contributions made by a minority group.

The studies focused on US and UK-based Black and Latinx individuals [Latinx is a gender-neutral term used to describe people who are of or relate to Latin American origin or descent].

The paper, published in the Journal of Experimental Social Psychology, is entitled: "The power of the ingroup for promoting collective action: How distinctive treatment from fellow minority members motivates collective action."