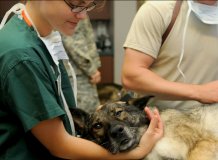 Female vets still face discrimination, and people in the veterinary profession who think discrimination is no longer a problem are the most likely to discriminate, a new study has revealed.

Researchers at the University of Exeter, working with the British Veterinary Association (BVA), surveyed approximately 260 UK-based employers, partners and managers to see whether they would show bias when reviewing the work record of male and female vets.

The study, designed by Dr Chris Begeny and Professor Michelle Ryan and launched at BVA Congress at London Vet Show today (15 November), showed that gender discrimination was present in many of the employers’ recommendations on pay, competence and career advice – and was most prominent among those who believe that “discrimination against women in the veterinary profession is no longer a problem”.

Dr Begeny said: “The results of the study offer compelling evidence that discrimination against women not only exists, but is in fact most commonly perpetuated by those who, perhaps ironically, believe that women do not face discrimination.

“Contrary to those beliefs, our results clearly demonstrate that discrimination is still a problem, negatively impacting the careers of women in this profession.

“But not everyone is necessarily contributing to this inequality.

“Instead it seems there may be a subset of individuals – substantial in size, but a subset no less – who may need to take a little extra time at work to consider whether their own bias is affecting their judgement on which of their employees or colleagues are truly most competent and capable.”

The experimental study asked respondents to review a recent performance evaluation of a vet.

Everyone in the study was shown the same evaluation but half of the respondents were randomly assigned a version in which the vet’s name was “Mark”, while the other half reviewed “Elizabeth”.

The researchers also asked questions to explore people’s views on the veterinary profession, including questions about whether they believed discrimination remained a problem.

Differences in the treatment of the male and female evaluations were most evident and systematic among those who believed female vets no longer experience discrimination. Altogether, 44% of respondents held this belief, of whom 66% were male.

Those who held this belief offered “Mark” a significantly higher salary than “Elizabeth,” ranging from £1,100 to £3,300 more.

The strongest pay disparity was among those who most strongly endorsed the belief, but even those who were generally indifferent or uncertain about this issue systematically paid “Mark” more than “Elizabeth”.

This was important, as with greater levels of perceived competence employers and managers indicated they would: (a) be more likely to let this vet take on more managerial responsibilities, (b) more strongly encourage them to pursue promotions, and (c) be more likely to advise other vets to look to this vet as a valuable source of knowledge.

By comparison, those who believed female vets still experience the negative impact of gender biases and discrimination (42%) showed little to no difference in how they perceived or treated “Mark” versus “Elizabeth”.

British Veterinary Association President Simon Doherty said: “The results of this study are disappointing but possibly not surprising for many of us – they clearly show that gender inequality and discrimination in the veterinary profession is still present, albeit sometimes subtle.

“We have been aware for some time that a stubborn pay gap exists between men and women in the profession but there has been a pervasive feeling that this will rectify itself as the large number of young female vets progress further in their careers.

“This report shows that this will not happen automatically.

“It is unacceptable that in 2018, when everything about two vets is equal, their gender can still have a significant impact on how they are perceived, treated and paid.

“We will undertake further research with the University of Exeter into ways in which we can address these beliefs and tackle such subtle inequalities but in the meantime we all have a role to play in engaging with these discussions.

“We’ll be exploring these issues at BVA Congress today and I look forward to hearing from our members about their personal experiences and suggestions about what can be done.

“If we are to address motivation and retention issues and create a profession where everyone feels fairly rewarded and valued for their work, we must start by checking our own unconscious prejudices.”

The new study was the second piece of research on workforce issues conducted as part of the Vet Futures project to explore confidence, motivation levels and retention within the profession.

The first study revealed that women in the profession were more likely than their male peers to struggle with the lack of role models and less likely to experience the feeling of “fitting in” and of being valued and admired by peers.

The follow-up study with employers was carried out in spring 2018.

Dr Begeny and Professor Ryan’s session, “A crisis of confidence? What’s happening to the veterinary workforce” is open to all attendees and will take place in the BVA Congress Theatre at London’s ExCeL at 9.30-10.20am on Thursday 15 November.

It will be followed by a panel discussion: ‘Creating a confident workforce’, where members can add their thoughts on how to address the issues highlighted by the research.