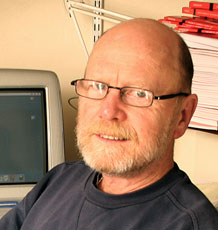 Chris Code is Professorial Research Fellow in the School of Psychology, Foundation Professor of Communication Sciences and Disorders (Hon) at the University of Sydney, Visiting professor University of Louisianna at Lafayette and used to be Research Manager for Speakability, the British lobbying and advocacy charity for aphasic people conducting research into the psychosocial consequences of aphasia and is Speakability's National Adviser on Aphasia. He is Patron of AphasiaNow. He has also been Fellow of the Hanse Institute for Advanced Stdy, Delmonhurst, Germany and Visiting Professor at the University of Bremen, Germany. His research interests include the cognitive neuroscience of language and speech, psychosocial consequences of aphasia, aphasia and the evolution of language and speech, recovery and treatment of aphasia, the public awareness of aphasia, the neuropsychology of number processing and speech and limb apraxias, facial action. He is co-founding Editor of the international journal Aphasiology, past Editor of the International Journal of Language & Communication Disorders and the Australian Journal of Communication Disorders, and is on the editorial boards of several journals. His books include Aphasia Therapy (1982 with DJ Müller), Language, Aphasia and the Right Hemisphere (1987), The Characteristics of Aphasia (1991) and Classic Cases in Neuropsychology (Vol I, 1996; Vol II, 2002) (with C-W Wallesch, Y. Joanette & AR Lecour) and Milestones in the History of Aphasia (2008) (with Juergen Tesak). He is a Fellow of the British Psychological Society and Fellow of the Royal College of Speech and Language Therapists and was recently honoured with a festschrift, Clinical Aphasiology. edited by MJ Ball & Jack Damico . He received the Robin Tavistock Award for Services to Aphasia in 2010.

Received The Robin Tavistock Award for Services to Aphasia 2010

Elected Fellow of the Royal College of Speech and Language Therapists

National Adviser to the charity Speakability

Neuropsychology, particularly of language and speech.