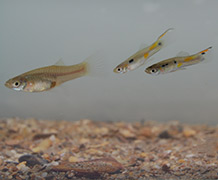 Leadership’s in the blood for tiny fish

University of Exeter researchers studied leadership in guppies by selectively breeding for fish that differed in how likely they were to lead a scouting party to examine a predator.

They created 30 breeding pairs of the males and females most likely to lead, and another 30 of those with lowest leadership.

Three generations later they tested males and females from these lines and found that there were “pronounced differences in leadership tendency” among the two groups – with the descendants of leaders more likely to be leaders themselves.

Males bred for low leadership were found to be more aggressive and less sociable than males bred for high leadership, but no such effect was seen among females.

“We wanted to know how much leadership is an inherited characteristic, and whether it’s linked to other traits,” said Sylvia Dimitriadou, of the University of Exeter.

“It seems leadership among guppies is partly inherited – around a third can be explained by their pedigree, with other factors such as their social and physical environment also key.

“Among males, this appears to be linked to other social traits such as lower aggression (measured by whether fish share food or try to push rivals away) and sociability (moving as part of a shoal and switching between shoals).

“In females, leadership also passed down the generations, but without observable changes to other aspects of behaviour.

“It’s not clear why this is. In guppies female and male cooperative and social behaviour differs, so it’s possible that certain traits co-evolve or co-develop differently among females and males.”

Traits such as boldness and tendency to explore did not diverge between the two breeding lines – meaning it was only social traits that seemed to differ alongside leadership in males.

The guppies in the study were bred in the lab, and behaviour in the face of a predator was tested by presenting them with a pike cichlid – a natural predator of Trinidadian guppies – separated by a clear pane of Perspex.

When guppies are aware of a predator, an individual or a small group leaves the relative safety of the shoal to approach and inspect, before returning to the group.

When they do this in pairs or groups, research has shown that the leading guppy is at more risk than the others.

The assessments of leadership were carried out by pairing guppies with a realistic robotic guppy, Robofish, and seeing how often the real guppy either led or hung back while approaching a predator.

In humans, research suggests leadership tendencies are moderately to largely inherited, though the genes or processes behind this remain largely unknown.

The paper, published in the journal Scientific Reports, is entitled: “Divergence in social traits in Trinidadian guppies selectively bred for high and low leadership in a cooperative context.”