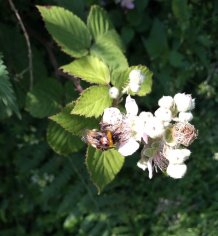 As the sun sets, bumblebees revisit "profitable" flowers they encountered during the day, new research suggests.

Many pollinating insects stop foraging well before sunset, but bumblebees can keep going as daylight dwindles.

However, this raises risks such as getting lost or eaten by a predator.

The new study, by the University of Exeter, examined the behaviour of buff-tailed bumblebees in the South Devon Area of Outstanding Natural Beauty (AONB).

The results show bees return to the colony with smaller amounts of pollen in the hour before sunset, compared to daytime foraging.

"By analysing the pollen, we discovered that bees in our study were visiting the same flower species in the evening as they did in the daytime," said lead author Katy Chapman, of Exeter's Centre for Research in Animal Behaviour.

"More research is needed, but we think bees are doing a quick journey out in the evening, going somewhere they know really well, to a food source they know is good – but they are also choosing to return to the colony before they have filled their pollen baskets.

The study was carried out in a mixed agricultural landscape, with the bees monitored at their colony entrance and pollen sacs collected from returning foragers.

Overall, there were fewer exits and returns per hour in the evening than in the afternoon.

Chapman added: "Bumblebees are typically active during the daytime, when the light levels are high, so dimming light was a key factor for our bees in the evening period, affecting how they found food.

"We are also considering whether light pollution could have an effect during sunrise and sunset, when bees are still active but artificial lights are turning on.”

The study was supported by a Natural Environment Research Council GW4+ Doctoral Training Partnership CASE studentship awarded to Chapman, in partnership with the South Devon AONB.

The paper, published in the journal Animal Behaviour, is entitled: "Bumblebees exploit known sources but return with partial pollen loads when foraging under low evening light."