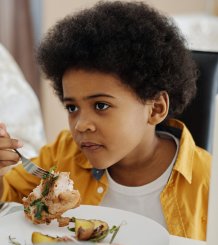 Children draw strongly upon moral principles and concerns when they consider whether it is right or wrong to consume meat and animal products.

New research has shown that youngsters are highly conscious of animal welfare, regardless of whether they deem it acceptable to eat animals or their products.

Adults, by contrast, tend to use social-based reasoning to justify the consumption of meat, citing that it is ‘natural’ and ‘necessary’ to do so – although they too will lean upon moral considerations if they take the counter view.

This new insight into the relative prioritisation of moral concerns regarding animals builds upon research published earlier this year that revealed how children think animals should be treated just as well, if not better than humans. This is a belief children may tend to lose during adolescence when they begin to develop a sense of moral hierarchy that gives different values to different animals.

Researchers at the University say these new findings could be significant when considering global meat consumption, and, how any attempts to reduce it may require tailored approaches for different age groups.

“We know that children evaluate eating animals as less acceptable than adults and think we ought to treat farm animals better,” says Dr Luke McGuire, Lecturer in Psychology in the Faculty of Health and Life Sciences. “Here we asked them 'why?' they thought that. The answers go some way to explaining why most children in the western world become socialised as meat-eaters despite their evident concern for animal wellbeing.”

In this new study, the researchers sampled more than 400 individuals, across three distinct age ranges: 9—11, 18—21 and 29—59. Each was asked to evaluate the acceptability of eating animals and explain their reasons for this. They were further asked whether it was acceptable to eat animal products such as milk and eggs.

Overall, 77% of adults said it was ‘okay’ to eat animals, compared to 51% of children. Within this population of children, the researchers found there was still a strong focus upon moral considerations, primarily animal welfare.

Dr McGuire says: “In these cases, some of the children are saying it's 'okay' to eat animals but they’re still expressing concern for animal welfare. You can see them wrestling with the moral dilemma in that reasoning. It may well be the case that many simply do not fully understand the connection between the animal, death and food.”

Adults who felt that eating animals was 'okay' drew more heavily upon social reasoning, or a blend of social and moral domains, suggesting that it was ‘natural’ and ‘necessary’ to eat meat for a healthy diet, but that issues of ‘humane slaughter’ and ‘animal welfare’ were important.

When the academics looked at the responses for both the adults and children who said it was ‘not okay’ to eat meat, they found the reasons focused strongly on the moral domain, such as animal rights and welfare.

The picture relating to attitudes towards animal products was less divisive, with 94% of adults saying it was ‘okay’ to eat them, compared to 89% of children.

“This lack of age-related differences speaks to the unique moral quality of killing in the use of animals,” says Dr McGuire. “Children and adults appear largely in agreement that because animals are not killed to produce milk, eggs, and cheese, then these products and practices are more permissible.”

“Overall, these findings suggest that it is knowledge of food systems coming in during adolescence that changes our reasoning,” concludes Dr McGuire. “We move from focusing on ethics to thinking about human hierarchies and meat as integral to survival as ways to counteract the cognitive dissonance we experience when thinking about animal harm.”

The research, Age-related differences in reasoning about the acceptability of eating animals, is published in Social Development.