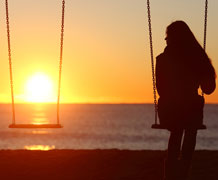 The study found that an average of 7% people were on average often or always lonely.

The middle aged are lonelier than older and younger people

Researchers analysed data from 38,000 people in the UK who took part of the BBC’s Loneliness Experiment last year.

They used a new method of analysing loneliness that looks at how often people said they felt lonely, how long the feeling of loneliness lasted and how intense it was, each aspect rated by the participants from 1 to 5.

Professor Victor told the European Sociological Association conference in Manchester, UK, today [Friday 23 August] that by combining the scores, they found that an average of 7% people were on average often or always lonely.

"Traditional analyses of loneliness focus mainly on how often people feel lonely, but this obscures and underestimates experiences that might be infrequent but intense, or that last very long,” said Professor Barreto.

“Taking this into account, we are also better able to understand how loneliness is experienced across the life course, rather than trying to establish an absolute age at which people feel most lonely.”

Professor Victor said: “Being lonely in later life is not the first time most had experienced loneliness – we found that it was often experienced throughout the course of their lives.

“Rather than focus on differences between age groups, we should focus on how loneliness is experienced across the life course.

“Responses to questions about which period of their life has been the loneliest enables us to put loneliness in later life into a broader life-course perspective rather than seeing it in isolation from the rest of the lives of individuals.”

The researchers found that when asked at what age they felt most intensely lonely, people were most likely to select their current age or slightly younger age than they were their childhood or youth.

They also found that for half of those aged 75 and over, being lonely was sometimes or always a positive experience. It was less so for younger people.

The UK participants were among 54,988 people who took part in the survey from 237 different countries, islands or territories.

The UK participants were mainly women, unmarried and living alone. The study was funded by the Wellcome Trust and was a collaborative venture with the BBC Radio 4 Anatomy of Loneliness Series.