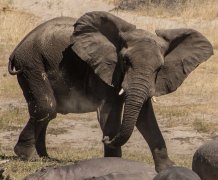 The research, by the University of Exeter, suggests that the removal of old male elephants, which are often the targets of trophy hunting, could lead to increased human-wildlife conflict.

The study, in collaboration with Elephants for Africa, examined the behaviour of 281 male elephants in an all-male area in Makgadikgadi Pans National Park, Botswana, over a period of three years.

The results found that with fewer old bull elephants around, elephants were more likely to be aggressive towards non-elephant targets such as vehicles, livestock and other species.

The adolescent elephants, in particular, were more aggressive and fearful to non-elephant targets when they were alone compared to with other males. This indicates that socially isolated adolescents may also be an increased threat to people.

"Our research draws attention to what is often a rather overlooked area in animal behaviour; that of the complex relationships and connections that occur between males in non-breeding all-male societies,” said lead author Connie Allen of Exeter's Centre for Research in Animal Behaviour.

“It appears the presence of more knowledgeable, older elephants in groups may play a key role in keeping the younger, less experienced males calm and lowering their perception of their current threat level, which means there’s less risk of aggression towards humans and other species.

Professor Darren Croft, of the University of Exeter, said understanding the causes of aggression in male elephants is essential for reducing human-elephant conflict.

“Old male bull elephants are often thought of as redundant and are targeted for trophy hunting," he said.

“These new results highlight the important role that old male elephants can play in shaping the behaviour of younger males, which are more aggressive in the absence of old bulls - including towards vehicles.

“These findings provide an important message for wildlife managers and suggest that the removal of old male elephants from populations could lead to an increase in human-wildlife conflict.”

Associate Professor Lauren Brent, of the University of Exeter, said: “Elephants are highly social animals. This study clearly shows how wildlife management can be informed by how elephants interact and react to each other.

“Future research on social behaviour will continue to enhance conservation efforts of this iconic species.”

The paper, published in the journal Proceedings of the Royal Society B, is entitled “Reduced older male presence linked to increased rates of aggression to non-conspecific targets in male elephants.”